The RCR ASM is the biggest Radiology Annual Scientific Meeting in the UK and attracts radiologists internationally.

For the first time at the RCR ASM, there is a dedicated trainees educational stream based on trainees’ request. These trainee workshops were organised by the collaboration of the JRF (Junior Radiologists Forum) and The Society of Radiologists in Training and will take place on Monday 10th September. These workshops are relevant for registrars of all stages of training and are useful for on-calls and 2b exam preparation. 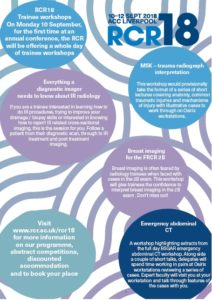